Tournament Season off to a Grand Start!

After a one week delay due to rain, the first tournament of the Fore Women Golf Association 2012 Season was played at the Chuck Corica Earl Fry course this past Sunday, March 25.  The weather was threatening up to the last minute, but with all the players doing the anti – rain dance the first group teed off at 11:30 and we had a great day.

We had a number of first time tournament players – Suzanne Arroyo, Charlene Hastings,  Valerie Mulhollen, and Linda Dobb.  Congratulations lady for joining us.  This was the first tournament as part of our Championship Series. Due to the delay the Leaderboards will post after Franklin Canyon since some of the Club and Players Championship players will be using next weeks scores.

The field played a 2 person best ball.  This a 2 person team and the lowest net ball per hole of the team counts.

The first place team was Liz Riddle and Sandy Gonzalez with a score of 64!  That awesome score might have something to do with Sandy shooting a personal best!

The second place team was Karen Billeci and Suzanne Arroyo with a score of 70.

The Championship flight played stroke play for low gross and low net.  Michelle Ross managed to snag both with an awesome gross score of 82 and net of 73.

Closest to the pin honors go to Sandy Gonzalez and Tami Waddell.

Chip Ins were made by Tina HIgashi, Valerie Mulhollen and Linda Dobb.

As a new part of our Tournament Season is we are having a season long Birdie Board.  This means every time a player gets a birdie at a tournament their name gets listed on the birdie board. We will honor the player with the most Birdies at the Annual!  Our first birdie of the season goes to Charlene Hastings in her first tournament!

The best part of  the day was getting to play with a group of fun ladies and the weather was awesome, many of the players were actually in short sleeves. Though the course conditions were a little wet at times. After the tournament Piper Shaull treated us to her delicious Guinness Cake!  Many thanks to Valerie Mulhollen who brought lovely goody bags for the players!

Be sure to check out the rest of the pictures here – Chuck Corica Tournament Pictures.

Check out the Tournament Schedule and sign up now to join us. 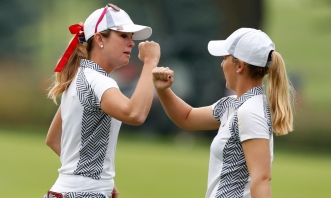 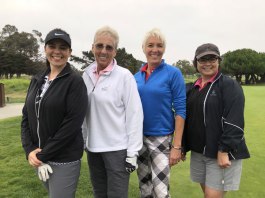 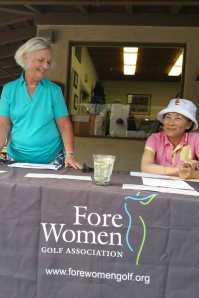 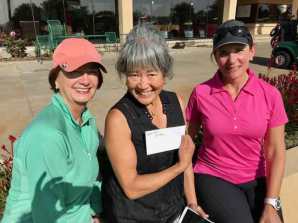